I asked Jerry Manuel for a ball and he laughed. I asked Ricky Ledee for a ball and he accidentally threw it to another fan. I asked John Maine for a ball, he said, “You just got one.” It was THAT kind of day, and when the Mets finished batting practice 50 minutes after I’d entered the stadium, I still didn’t have anything.

I got the corner spot in the left field Loge, figuring I’d cash in on the Twins pitchers, but when I called out for balls, they all looked at me as if they recognized me from the day before–and of course there wasn’t a single ball hit anywhere near me.

Batting practice was so slow that I took out my journal and started writing. I might’ve looked relaxed, but I wasn’t. I felt helpless. I’d been inside Shea for an hour and 20 minutes and STILL didn’t have a ball. 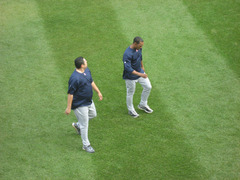 The highlight of BP was hearing a young Mets fan heckle the Twins. His funniest insult was directed at Dennys Reyes (245 lbs.) and Ramon Ortiz (175 lbs.) as they walked by: “You guys should learn to eat from each other!”

Chris Heintz must have missed the heckling–or maybe he agreed with it–because he threw me a ball soon after. Other than the fact that he saved the day, there was nothing special about it. The ball was sitting on the warning track, and when he started walking toward it, I shouted his name and said “please” about 1,000 times.

After I caught the ball, the kid on my right (who looked like a wannabe 9th grade bully) turned and said, “You better watch out if another one comes up here. I’m gonna have to play dirty.”

Luckily for him, there wasn’t another one. Unluckily for me, the ball from Heintz was the only one I got in 100 minutes of batting practice.

By the time BP ended, I was standing in the front row behind the Twins’ dugout. When all the players and coaches walked off the field, Ron Gardenhire flipped a ball over my head. Everyone reached and jumped for it, but I jumped the highest and grabbed it with my bare hand–and that was my athletic moment of the day. 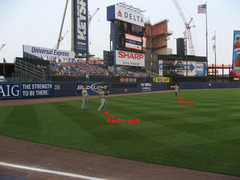 Twenty minutes before game time, Mike Redmond and Joe Mauer began playing catch in left field, and when they finished, Redmond tossed me my third ball of the day.

With Johan Santana making the start for the Twins, I expected the Mets to hit lots of foul balls, but no, the game was just as dead as BP had been. It was weird. Santana was “pitching to contact” and struck out just one batter all night. He was still dominant and incredibly efficient. He threw 27 total pitches through the first three innings, 36 through four, and 50 through five.

I like the Mets. They’re my favorite team, but I don’t call myself a “Mets fan” because of games like this. I’d been rooting for Santana for years, and I wasn’t about to stop just because he happened to be pitching in Queens. I’d never seen him pitch in person (or if I had, I don’t remember), and I wanted to see him at his best.

By the end of the sixth inning, he’d thrown just 59 pitches, and when the seventh inning wrapped up, his pitch count was 67. I really wanted him to go the distance, but because of the lopsided score, I wasn’t sure if Gardenhire would leave him out there.

He did, and Santana ended up pitching the fourth shutout of his career. Four hits. No walks. 92 pitches. 40,000 disgruntled Mets fans.

After the game, Gardenhire tossed me another ball at the dugout, mwahaha.

• 472 consecutive games with at least one ball