And now, the guys who DID toss me balls: Guy Conti, Orlando Hernandez, and Marlins owner Jeffrey Loria.

The Conti ball was as simple as it gets. It was batting practice. I called down from the right field Loge. He tossed it up. 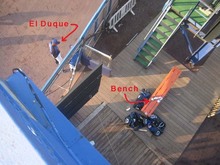 The El Duque ball was fun. He had just finished a bullpen session and had several balls in his glove. I asked politely if there was any chance that he could spare one.

“Which one do you want?” he said, placing them on the orange bench and pointing to each ball. “One, two, three, or four?”

It was hard to see the balls, not only because I was 30 feet up, but because I’d been to my eye doctor hours earlier and gotten some drops in my eyes (glaucoma test) that blurred my vision slightly for most of the afternoon. I was looking for commemorative logos, but all the balls pretty much looked the same. I couldn’t make up my mind. El Duque was getting impatient. I didn’t want to lose my chance.

“Number one” seemed to have a hint of yellow in the stitching, which meant it was probably one of those stupid unmarked All-Star balls from 2004.

El Duque must’ve forgotten which was which because he promptly grabbed number one and fired it at me–and sure enough, it was one of THOSE balls.

As for the Loria ball…

I spotted him at the dugout after BP (he’s the one wearing sunglasses), and when I asked him for a ball, he looked around and shrugged and said, “There are none.” Actually, sir, there were three zipped bags full of balls right next to you. Just at that moment, a ballboy walked by with–what else–a ball in his hand. Loria practically grabbed it from him and tossed it to me. Brand new. I

mean flawless. You couldn’t buy a more pristine ball. And then he signed an old Mets-Marlins ticket stub (upside down, of course) that I’d brought.

1) When I asked Girardi for a ball, he looked up and noticed a little kid (without a glove) sitting on my right. Girardi pointed at the kid to indicate that he was going to toss the ball to HIM, but then realized that the kid wouldn’t be able to catch it. “I’ll catch it for him,” I said. Girardi then tossed me the ball, and I handed it over. I don’t count that ball in my collection.

2) An autograph-collecting friend of mine happened to get a ball at the Marlins’ dugout as BP was winding down. It was a bit too scuffed for him to get signed, so he gave it to me. I don’t count that one either. I’m going to take it with me to Philadelphia tomorrow and give it away, most likely to an unsuspecting kid (WITH a glove) who’s actually paying attention and trying hard to get a ball, but just coming up a bit short.

3) As I was heading for the dugout at the end of BP, I heard a distant “Zack!” and turned around and spotted a father and son waving at me from the Loge. I didn’t recognize them. Was it the blurred vision? Or am I just a forgetful jerk? I don’t know. I paused for a moment and waved back and then continued on my way. And then I felt bad. I did, in fact, need to hurry to the dugout to get in position in the front row, but I could’ve taken a minute to go over and say hi. So…whoever you are…I apologize. It wasn’t an intentional diss. I get recognized 20 times a day at Shea (at the very least), so it’s sometimes hard to remember who I’ve actually met in person when there are so many others who randomly shout my name because they recognize me…from wherever.

4) “Congrats on seven-twenty-four,” said a young man as I made my way up the steps after BP. He was referring to Barry Bonds’ 724th career home run, which I caught on 8/16/06 at PETCO Park…but who was he and how did he know? I asked him how he’d heard about it. He said he’s been reading my blog regularly for about a year. Cool! His name is Greg, and he’s left a few comments as “skykid3000.”

5) Another Greg (a.k.a. “gregorybarasch” — pictured here with his cup trick outside GATE C) left a comment on my last entry and said he got 11 balls at THIS game. It’s true. He put me to shame. He did have a few extra tricks up his sleeve that made it impossible for me to compete with him, but that doesn’t take away from his monster day. It’s all about outsmarting the competition and coming up with an edge. And he did it. Congrats. Although it’ll make me cringe, I look forward to hearing the details.

In terms of foul balls, the game was unbelievably frustrating. I don’t even want to write about it. That’s how bad it was. All I can say is that there’s a certain beer vendor and usher that I wish I’d never have to see again. But the night was still a success. A HUGE success. Steve Trachsel pitched brilliantly and Jose Valentin slugged two homers as the Mets clinched the NL East with a 4-0 victory, ending the Braves’ steak of 14 consecutive division titles.

After the first out in the top of the ninth, I had headed back down to the Field Level and squeezed my way through the crowd toward the front row behind the middle of the Mets’ dugout. After the on-field celebration, most of the Mets exited the field at the first-base end of the dugout, and one of the players flung his hat into the crowd. “Oh MAN!” I thought. I’d actually been thinking of going to that side. But then a few of the players veered from the pack and headed straight toward me. Woodward was one of them, and as he approached, I took off my hat and made a flinging gesture, which obviously worked 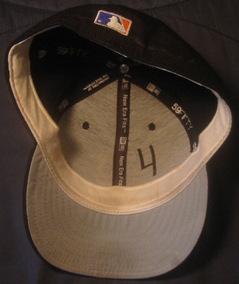 because he took of his hat and flipped it high in the air. Everyone else reached up. I jumped up and reached out, barely snatching it above a dozen hands before belly-flopping on the dugout roof. I was psyched, as if you can’t tell from the picture. I’ve been to 630 games in my life, and this is my first cap ever. It was sweaty and stinky and had Woodward‘s No. 4 written on the inside with a thick black marker. Awesome.

So yeah, I only got three balls, but who cares? Do you care? I don’t.

• 453 consecutive games with at least one ball

Remember the talk show that I mentioned in my last entry? Well, it fell through, and that’s a shame because it was Letterman. But there’s something else with CBS that’s still in the works…