I got my first ball as soon as I ran inside for batting practice. Kaz Ishii and Shingo Takatsu–the two Japanese pitchers on the Mets–were playing catch in shallow right field. Ishii airmailed one of his throws. I’d just sprinted down the steps to the third row. (The first two rows of blue seats are off limits.) I didn’t even see the ball coming. I just heard it smack a seat and then picked it up off the ground.
Nice.

Before long, a father and his VERY young son made their way down to the blue seats. They actually had tickets. They both had gloves. I was screwed.

The kid immediately started shrieking at Pedro Martinez, who tossed a ball to his father to make the twerp shut up. (It didn’t work.) One minute later, the father reached out and caught a line drive that was heading right toward me. And then, a minute after that, Steve Trachsel walked over and handed the kid another ball.

The father, who later told me that he pays $18,000 a year for those seats, offered one of his balls.

Trachsel was signing autographs for a few fans nearby, so I walked over and got him on one of the many extra ticket stubs I’d collected last week. There was one moment when I took my eye off the batter. That was when Trachsel was handing back my ticket and Sharpie. During that moment, a ball landed RIGHT next to me and was promptly snatched by a vendor who hadn’t yet started working.

Eventually, some Mets righty sliced a little pop-up into the seats. The father misplayed it, and the ball bounced right to me.

“Give it to the kid!!” shouted an usher 15 rows behind me in the main aisle. “You got enough balls!!”

I looked at the father and said, “This guy has been hassling me since 1992. Can you make him shut up?”

“No problem,” he said. Then he turned toward the usher and shouted, “We already got some!! It’s fine!! Thanks!!” And that was the end of it.

There’d been a ball sitting on the outfield grass for about 10 minutes. Danny Graves finally walked over and picked it up.

He chuckled and tossed me the ball. I was about to return it when he told me to keep it. “I can’t catch very good,” he joked and came over to sign. (WAS he joking?)

I got Kaz Matsui’s autograph a few minutes later and then, amazingly, the right field seats got emptier. The vendor left for work. The father and son took off for the dugout. Other than the few 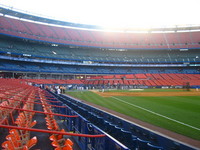 autograph collectors behind me, there was no one else around. I couldn’t believe it. It was 5:19pm. Shea Stadium had been open for 39 minutes, and I had the place to myself. Of course, no one else hit or threw a ball anywhere near me for the rest of the Mets’ batting practice.

Once the Marlins started warming up, I headed to the left field corner. On the way, I stopped briefly at their dugout on the 3rd base side and got my fourth ball of the day from Chris Aguila.

I didn’t get anything in left field. I was sure that all pitchers would recognize me (thanks to Ron Villone), so I didn’t even bother asking any of them for balls. I ran back to the 1st base side. Carlos Delgado was done taking fungos and had a ball in his glove–but he ignored my request. I ran up to the Loge, out near the RF foul pole. Dead. I ran all the way around the stadium to the LF Loge, hoping that the players wouldn’t recognize me if I were in a different section. (Yesterday, as you may recall, the Villone fiasco took place on the Field Level.)

The Marlins hit lots of balls into the left field corner, but I couldn’t get anyone to toss one up. Antonio Alfonseca completely ignored me. Ismael Valdez was also pretending to be deaf. Josh Johnson? Same thing. Josh Willingham then joined the list of Marlins who did NOT throw me a ball. Jeff Conine was too far away. So was Josh Beckett…but he’s always been so receptive to fans that I decided to give him a shout. It worked. He turned right around and spotted my bright aqua Marlins cap and threw me the ball. The picture on the left (click to enlarge) shows how far away he was when he chucked it.

Moments later, I called down to Villone for a ball.

He looked up, then pointed toward the Field Level and shouted, “That was you over there yesterday, wasn’t it?”

“That was a good thing you did!” he yelled, and then he tossed me the ball.

I went back to the Marlins’ dugout at the end of BP and got a pearl from 3rd base coach Jeff Cox. That was my seventh and final ball of the day. I’d splurged and bought a $30 seat in a great foul tip section behind the plate, but it didn’t pay off. 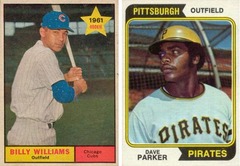 • 422 consecutive games with at least one ball

I already have two tickets for today’s game. I’m going with my friend Sean. He’s the guy who helped me get three of my 17 balls on 9/6/05 at Camden Yards.