It was a simple day. But it was a good day.

It drizzled briefly before the stadium opened, but there WAS batting practice. Mad props to the courageous grounds crew.

I headed to the right field foul line and got shut out for the first 20 minutes. Then, with several Mets playing catch in front of the dugout, there was an overthrow. The ball trickled all the way out to me along the warning track. I darted into the off-limits blue seats and leaned over and grabbed the ball and raced back to the orange seats before anyone (with any authority) saw me.

Once again, I was the only fan in the Loge, and once again, there wasn’t a single ball hit up there…until I left for the 1st base dugout. Then two balls landed there within five minutes. Funny how that works. 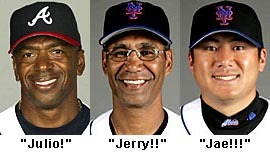 Just before the Mets finished BP, Julio Franco walked by the dugout and tossed me a ball that I pointed out. It had been sitting in foul territory, and he was about to walk right past it. One minute later, Mets 1st base/outfield coach Jerry Manuel tossed me a ball, and 30 seconds after that, I got one from Jae Seo.

Three balls in 90 seconds. Not bad. That gave me six on the day–and it made me realize why exactly Yankee Stadium is so tough. Not only are there 50,000 (hostile) fans in attendance every day, but there’s NO access to the seats behind the dugouts…not even during BP. If this game had been in the Bronx, I wouldn’t have gotten those three balls.

The Braves took the field and I headed to the LF foul line. Brian McCann tossed a ball to some guys who couldn’t reach it. The ball took a series of lucky bounces, and I ended up with it after a four-on-one scramble. That was number seven.

A little while later, Tim Hudson decided to take fungos at shortstop. When an extra ball rolled his way, I got him to throw it to me. I was 10 rows back. He chucked it about 60mph from at least 100 feet away. Major tailing action. Must’ve been a two-seamer. Full extension on the catch.

I ran all over the left side of the stadium for the rest of BP but didn’t get anything else–and it was all my fault. At one point, there was a ball sliced into the seats about 40 feet away. I had no chance of getting there (thanks to all the railings), so I watched a pack of little kids chase it…and chase it…and chase it as it trickled down one step after another. BANG!!! A ball came out of nowhere and smacked a seat right next to me and bounced away. Some lady got it. I wanted to die. It wasn’t even my first brainfart of the day. Early in BP, on the right field side, I misplayed a bounce off the warning track and screamed a four-letter word as the ball sailed inches over my outstretched glove.

I didn’t get another ball all night, but I saw a GREAT game. Pedro pitched his 17th career shutout and racked up 10 strikeouts, including his 200th of the season. The game was done in two hours and four minutes. 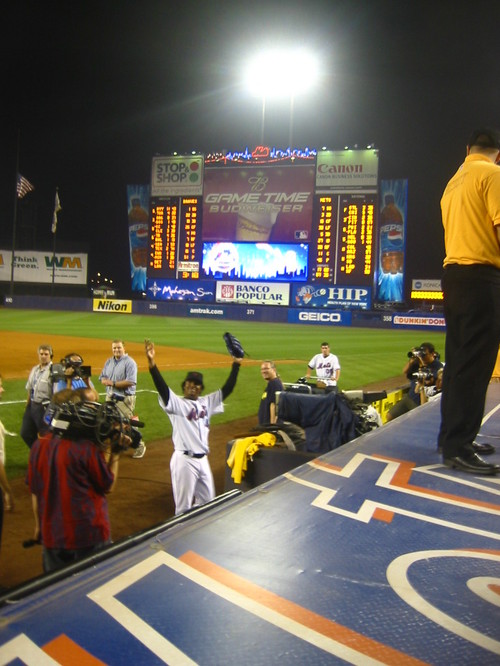